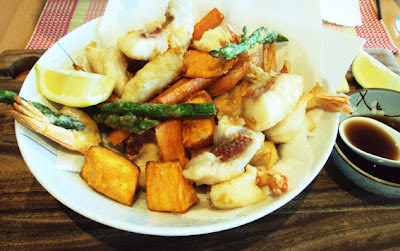 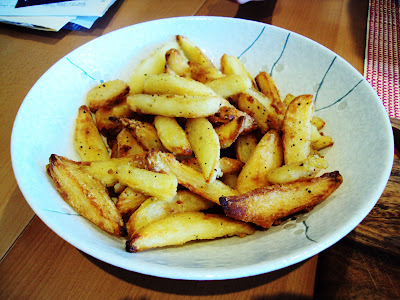 Tempura is Japanese style deep fried dish. It tends to be lighter batter than fish & chip's batter and having with light dipping sauce. I like to cook tempura at home, because it is much healthier and I can choose my favorite vegetable and seafood.
If you find out how often most restaurants change the oil, you wouldn't eat deep fried food in the restaurant. Some restaurants use oil for a week. Heavily used oil can create harmful substance to cause cancer, according to my research. I think we should know it before eat.


Tonight I made healthy home made tempura using prawn, red snapper, asparagus, carrot, Kumera (sweet potato) & Potato chips. Deep frying process can be hard because hot oil need to deal with additional care. My tempura ended up too light batter. I think too much ice cubes added up water when it became melt it down over the time and It is important to separate two batch of batter to keep consistence.


Basically you can feed a whole family with mixed veggie and seafood tempura platter. Just keep deep fried until everyone is happy. You can choose any vegetable or seafood you like.


One of things I was concerning deep frying was how to re-used oil. According to my research, the used oil can be kept in an empty wine bottle or plastic bottle and then store it tightly capped and away from light. It can be re-used for 2~3 times but it is important to Filter used cold oil with a tea strainer, kitchen paper, muslin or coarse coffee machine filter paper.


Try your own tempura. They are so yummy.

1. Prepare all ingredient to clean and to cut into nice bite size.

2. Divide the flour, cornflour, baking powder and salt between two bowls and mix well. to one bowl add enough water, with half the ice cubes, to make up a thin batter. mix lightly with chopsticks for about 30 seconds. the mixture should still be very lumpy with the flour not quite mixed through. The reason of making two separate quantities of batter is keeping thickness on use.

3. Fill a wok one-third full of oil and heat to 180 degree, or until cube of bread dripped in the oil browns in 15 seconds. working in batches, dip the prawns and vegetables lightly into the batter and cook until lacy, crisp and golden. Remove from the wok with spider and drain on crumpled paper towels. When the batter becomes too thick, make up the second batch and use it straight away. Continue cooking the remaining ingredients, making sure the oil stays at 180 degree to ensure a crisp batter.

4. Serve on a large platter with some tempura dipping sauce.