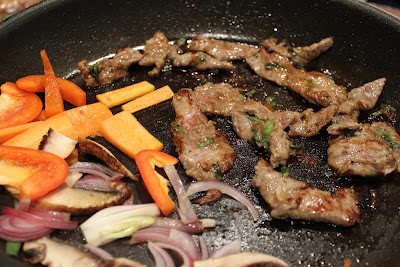 What is the first thing that comes to mind, when I think Korean food? Probably Korean BBQ. Korean BBQ is called ‘Gogigui’ in Korean. It means ‘grilled meat’.  Bulgogi is a delicious Korean BBQ that comes with a marinated sauce and is cooked with healthy vegetables. According to Wikipedia, it is listed at number 23 on the World's 50 most delicious foods readers' poll compiled by CNN Go in 2011. Surprisingly, it is considered as one of the most popular foods in the world, although you might not have heard of it.

Recently friends asked me about some newly opened Korean BBQ restaurants in Melbourne. And also there are articles about it in Broadsheet and Epicure in The Age. So I thought I would find out what it is all about.

I can tell you why I like it. Korean BBQ is very social food, freshly cooked and served direct to the table. Eating is a performance. There is a grill in the centre of the table with a circle or rectangular air extract suspended above it. Hanging pipes are tangled on the ceiling and secret cooking gargets are installed under the table. As Broadsheet said, one of the new Korean restaurants is like ‘the set of a Stanley Kubrick film’.

Friends or family sit around the table. Cooking, eating and drinking are a form of abundance. Eating and drinking mean a sense of relaxing, gathering and sharing from pre historic times. It is a delicious reward after a long hard working day. Other cultures would have similar things: people socialize with wonderful food and wine on the table.

However, Bulgogi is different from the other ordinary dinner parties or typical western BBQs. Korean people enjoy freshly cooked food. One thing I know is they love cooking almost everything on their table while eating.  You can find easily people cooking food in a large pot or pan in some Korean restaurants. On the other hand, most western BBQs can be served after finishing cooking. My Korean mum wouldn’t like it because it gets cold.

Here, I cook Bulgogi in my favourite way. This is my menu for people who visit my house for the first time. They finally understand what Korean food is about and it gives them a great Korean social experience.

1.       To make the marinade, place all ingredients of the marinade in a large bowl. Mix together thoroughly. 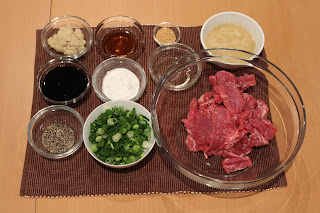 2.       Discard any excess fat from the scotch fillet and slice as thin as possible. If the beef is left in the freezer for 15 mins, it makes it easy to slice them thin. But it is up to you how thin you want. Add all beef to marinade and stir to coat. Leave in the fridge for at least 2 hours or overnight to allow the flavours to permeate and the meat to soften. 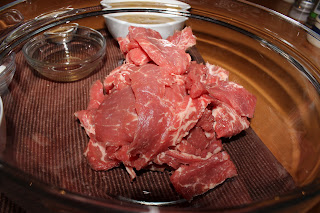 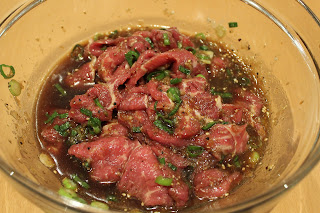 3.       To cook steamed rice, wash the rice well, add double water of rice quantity. For example, two cups of water is for one cup of rice. 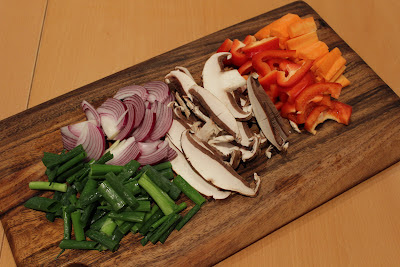 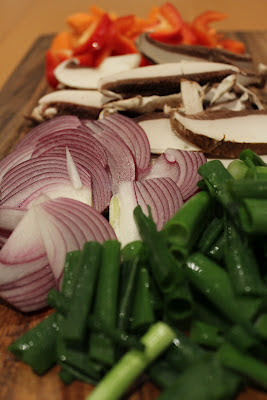 5.       Set portable gas stove on the table. Heat a frying pan with a bit of vegetable oil and add the marinated beef, sliced onion, capsicum, carrot and spring onion. If you don’t have a portable gas stove, cook food in your stove, bring them to the table. 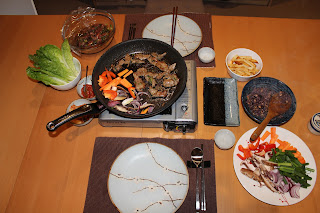 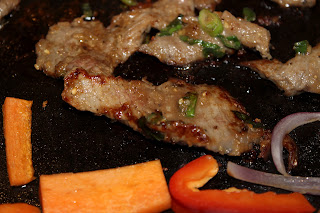 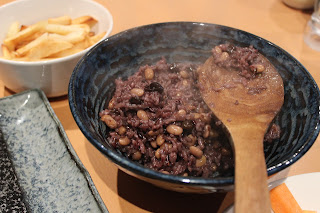 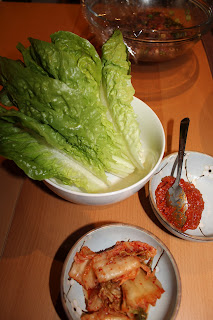 How to eat:
Take one lettuce leaf on your plate and place a bit of cooked beef, vegetable, steam rice and Samjang. Wrap food up tightly in leaf and take it in one or two bites. 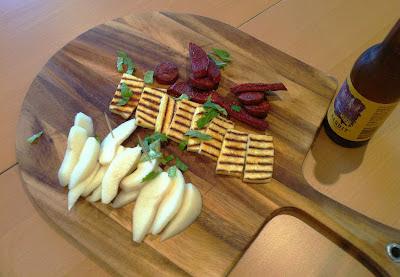 Home-made frozen dumplings, some cheese and dry meat are very handy for quick snacks on lazy weekends. It is delightful emergency food. We should do have them in our fridge all the time.

One Saturday afternoon at 3pm, Sean’s friend came over to our house to catch up. We got a bit hungry after a while but dinner time is quite not yet. I looked for something that I can make as a quick bite for three hungry people. I found some salami, chorizo and some half blocks of haloumi cheese in the fridge and also fully ripe pear in the fruit basket. I peeled the pear, cut the cheese, grilled salami, chorizo and haloumi cheese and place them all on the board. It didn’t take long to get food on the table and they become delightful snacks! 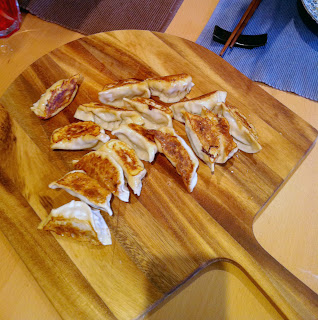 I found more. I cooked my home-made frozen dumplings. Nowadays I am so enthusiastic about making them. Not only 30 dumplings, last time I made 120 dumplings of three different flavours: vegetable, kimchi and pork. It took a day to make them. But when it come lazy day like this, they are super handy food. I normally fry them one side for 2 minutes and steam with chicken stock, covered by lid until all liquid is evaporated. I serve with soy sauce, lemon juice and toasted sesame seeds dipping sauce.

I wonder what other emergency food there are. Korean style spring onion pancakes and kimchi pancakes are other possibilities. All ingredients are always available in my pantry and fridge. Spring rolls and a quick pizza could be other ones as well.

Bye for now.
Posted by Eunjae Chung at 22:38 No comments: